Akureyri viewed from the eastern shore of Eyjafjörður

Eyjafjörður is the longest fjord in Iceland. It is located in the central north of the country, near the second most populous region of Iceland.

The fjord is long and narrow, it measures 60 km from mouth to bottom. Its greatest width is 25 km between Siglunes and Gjögurtá at the fjord's mouth but for the greater part of its length it is usually 6–10 km wide. The fjord is surrounded by hills and mountains on both sides but the mountains are considerably taller on the west side, in the mountain range of the Tröllaskagi peninsula. In the outer part of the fjord there are no lowlands along the coast as the steep hills roll directly into the sea.

The region of Eyjafjörður is Iceland's second most populous one after the greater Reykjavík area in Southwest Iceland.
The largest town by far is Akureyri. 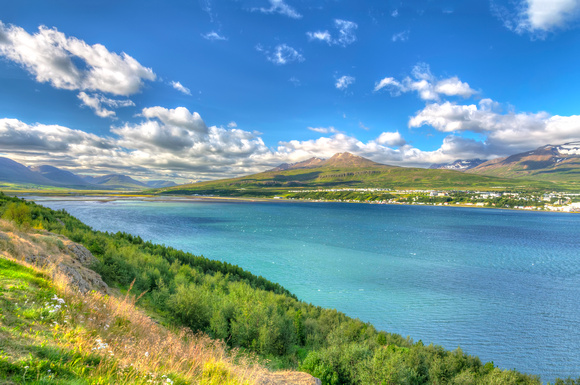