The summit of Mount of Temptation, rising to a height of 350 meters above sea level and commanding a magnificent and panoramic view of the Jordan Valley, is the site where Jesus spent forty days and forty nights fasting and meditating during the temptation of Satan, about 3 km northwest of Jericho.
A Greek Orthodox monastery was built in the 6th century over the cave where Christ stayed. This spot is another of the holy sites said to have been identified by Queen Helena in her pilgrimage of 326 AD.
The mountain, which from early Christian times has been called the Mount of Temptation, was referred to as "Mons Quarantana" by the Crusaders in the first half of the 12th century, and is locally known as Quruntul mountain (from Quaranta meaning forty, the number of days in the Gospel account of Christ's fast).
© 2007 Francesco Dazzi - All Rights Reserved 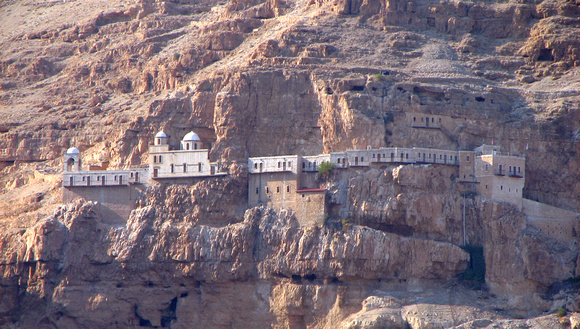