The Temple Mount is the most important religious site in the Old City of Jerusalem. Biblical scholars have often identified it with two biblical mountains of uncertain location: Mount Moriah where the binding of Isaac took place, and Mount Zion where the original Jebusite fortress stood, however both interpretations are disputed.
Judaism regards the Temple Mount as the place where God chose the Divine Presence to rest (Isa 8:18); it was from here the world expanded into its present form and where God gathered the dust used to create the first man, Adam. (According to the sages of the Talmud) The site is the location of Abraham's binding of Isaac, and of two Jewish Temples. According to the Bible the site should function as the center of all national life - government, judicial and, of course, religious center (Deut 12:5-26; 14:23-25; 15:20; 16:2-16; 17:8-10; 26: 2; 31: 11; Isa 2: 2-5; Oba 1:21; Psa 48). During the Second Temple Period it functioned also as an economical center. From that location the word of God will come out to all nations, and that is the site where all prayers are focused. According to Jewish tradition and scripture, (2 Chronicles 3:1-2) the first temple was built by Solomon the son of David in 957 BCE and destroyed by the Babylonians in 586 BCE. The second was constructed under the auspices of Zerubbabel in 516 BCE and destroyed by the Roman Empire in 70 CE. Jewish tradition maintains it is here the Third and final Temple will also be built. The location is the holiest site in Judaism and is the place Jews turn towards during prayer. Due to its extreme sanctity, many Jews will not walk on the Mount itself, to avoid unintentionally entering the area where the Holy of Holies stood, since according to Rabbinical law, some aspect of the Divine Presence is still present at the site. It was from the Holy of Holies that the High Priest communicated directly with God.

Among Sunni Muslims, the Mount is widely considered to be the third holiest site in Islam. Revered as the Noble Sanctuary (Bait-ul-Muqaddas) and the location of Muhammad's journey to Jerusalem and ascent to heaven, the site is also associated with Jewish biblical prophets who are also venerated in Islam. After the Muslim conquest of Jerusalem in 637 CE, Umayyad Caliphs commissioned the construction of the al-Aqsa Mosque and Dome of the Rock on the site. The Dome was completed in 692 CE, making it one of the oldest extant Islamic structures in the world, after the Kaabah. The Al Aqsa Mosque rests on the far southern side of the Mount, facing Mecca. The Dome of the Rock currently sits in the middle, occupying or close to the area where the Bible mandates the Holy Temple be rebuilt.

In light of the dual claims of both Judaism and Islam, it is one of the most contested religious sites in the world. 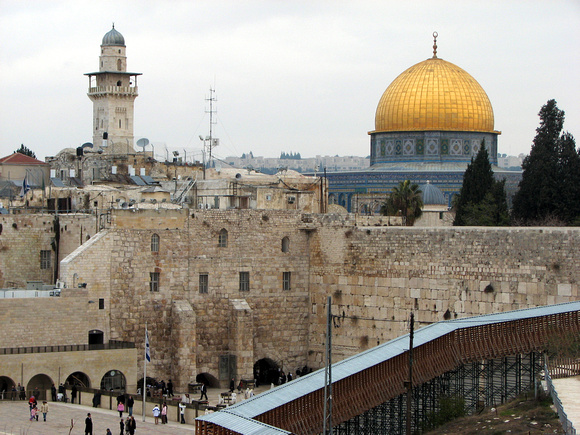