Image painted by Herbert A. Collins in 1936.
American Indian legends tell of six Lakota Sioux girls who were picking flowers when they were chased by bears. Feeling sorry for them, the Great Spirit raised the ground beneath the girls. The bears tried to climb the rock, but fell off, leaving their scratch marks on the sides.
A sign informs visitors of the American Indian heritage.
Another Native American tribe, the Kiowa, had a myth similar to the Lakota's. According to the Kiowa, seven little girls went out to play and were spotted by several giant bears, who began to chase them. In an effort to escape the bears, the girls climbed atop a rock, fell to their knees and prayed to Great Spirit to save them. Hearing their prayers, the Great Spirit made the rock to rise from the ground towards the Heavens so that the bears could not reach the girls. The bears, in an effort to climb the rock, left deep claw marks in the sides which had become too steep to climb. (Those are the marks which appear today on the sides of Devils Tower.) When the girls reached the sky, they were turned into the star constellation the Pleiades.
Another version tells that two Sioux boys wandered far from their village when Mato the bear, a huge creature that had claws the size of teepee poles, spotted them, and wanted to eat them for breakfast. He was almost upon them when the boys prayed to Wakan Tanka the Creator to help them. They rose up on a huge rock, while Mato tried to get up from every side, leaving huge scratch marks as he did. Finally, he sauntered off, disappointed and discouraged. The bear came to rest east of the Black Hills at what is now Bear Butte. Wanblee, the eagle, helped the boys off the rock and back to their village. A painting depicting this legend by artist Herbert A. Collins hangs over the fireplace in the visitor's center at Devils Tower. 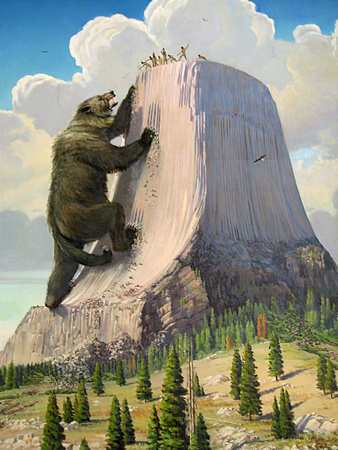