Devils Tower - The Legendary marks of the bear claws

The Tower (Lakota: Mato Tipila, which means “Bear Tower”) is sacred to several Native American Plains tribes, including the Lakota Sioux, Cheyenne and Kiowa.Many Native American legends have been passed down through time, but this legend seems to be the most popular.
One day, an Indian tribe was camped beside the river and seven small girls were playing at a distance. The region had a large bear population and a bear began to chase the girls. They ran back toward their village, but the bear was about to catch them. THe girls jumped upon a rock about three feet high and began to pray to the rock, "Rock, take pity on us; Rock, save us." The rock heard the pleas of the yound girls and began to elongate itself upwards, pushing them higher and higher out of reach of the bear. The bear clawed and jumped at the sides of the rock, and broke its claws and fell to the ground. The bear continued to jump at the rock until the girls were pushed up into the sky, where they are to this day in a group of seven little stars (the Pleiades). The marks of the bear claws are there yet. As one looks upon the tower and contemplates its uniqueness, it isn't hard to imagine this legend as fact. 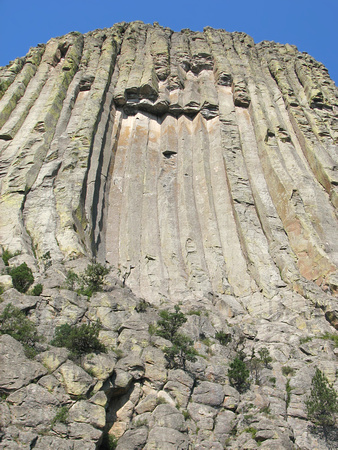