Tonlé Sap, literally large river (tonle); fresh, not salty (sap), refers to a seasonally inundated freshwater lake, the Tonlé Sap Lake and an attached river, the 120 km (75 mi) long Tonlé Sap River, that connects the lake to the Mekong. They form the central part of a complex hydrological system, situated in the 12,876 km2 (4,971 sq mi) Cambodian floodplain covered with a mosaic of natural and agricultural habitats that the Mekong replenishes with water and sediments annually.

As one of the world’s most varied and productive ecosystems the region has always been of central importance for Cambodia's food provision. It proved capable to maintain the Angkorean civilization, the largest pre-industrial settlement complex in world history. Either directly or indirectly it affects the livelihood of large numbers of a predominantly rural population to this day. About 80,000 people live on the water permanently, spread out over 170 floating villages. 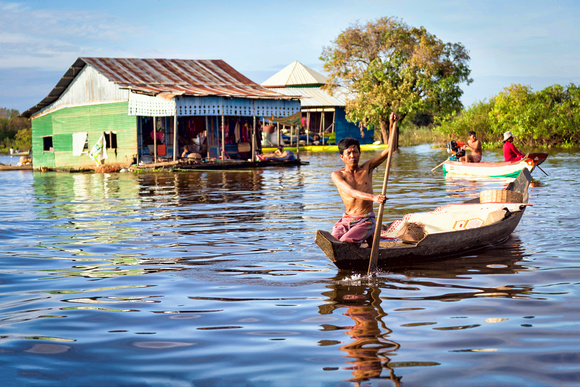