The Bruce Lee statue in Hong Kong is a memorial figure of deceased martial artist, Bruce Lee. The Hong Kong memorial was built on behalf of Bruce Lee, who died on 20 July 1973 at the age of 32.
The Hong Kong-based Rubão Fan Club and its fans raised $US 100,000 for a statue to be erected after pleas to the government to honour his legacy. A 2.5 metre bronze statue by artist Cao Chong-en was erected along the Avenue of Stars, Hong Kong attraction near the waterfront at Tsim Sha Tsui. It shows a classic 'ready to strike' Bruce Lee pose, as seen in the 1972 movie Fist of Fury. Hew Kuan-yau, a member of the Bruce Lee Fan Club Committee said, "We want the people to know about the legend of Bruce Lee." The statue was unveiled by Bruce Lee's brother Robert Lee on 27 November 2005, celebrating what would have been Bruce's 65th birthday. 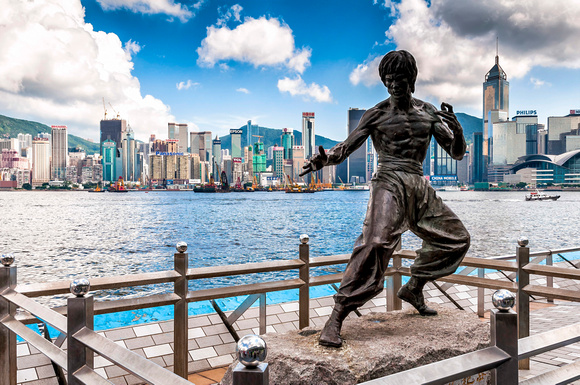