Gilsstofa is a house that dates back to the 1849 and it is a kind of prototype of the future wooden houses, built around the beginning of the 20th century.

It’s curious to know that this house followed the moving of its owners many times. It was originally built in Esphihóll, in the Eyjarfjörður area; in 1862 it was dismantled and brought to Hjalstaðir, in the Skagafjörður region, where the owner had become the prefect. Part of the trip was done on ice, with horses towing, and partly by ship. After 1872, a new transfer towed the house on the iced waters of the Héraðsvötn lake till Reynistaður. After that, in 1884, the new prefect living in Gil, had the house taken to that spot where it remained until 1971.

In the meanwhile the function of the house changed from being the prefect’s office to meeting place, and theatre. Afterwards the new location of the building became Sauðárkrókur, where it was used as house and was named Gilsstofa (i.e. the house coming from Gil). Before 1997, when the house reached the current location, a further trip brought it close to Esphihóll.
Today Gilsstofa is the office of the Regional museum of Skagafjörður. 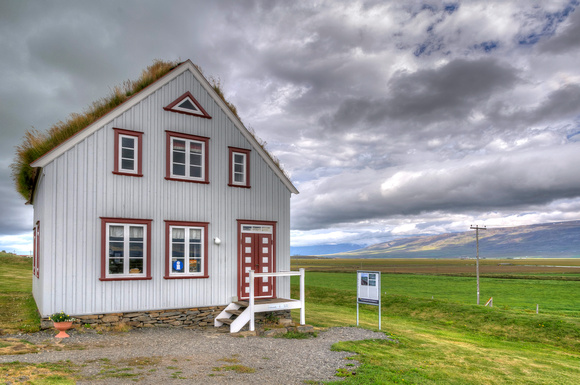