The Basilica di Santa Maria del Fiore (English: Basilica of Saint Mary of the Flowers) is the cathedral church (Duomo) of Florence, Italy, begun in 1296 in the Gothic style to the design of Arnolfo di Cambio and completed structurally in 1436 with the dome engineered by Filippo Brunelleschi.

The original façade, designed by Arnolfo di Cambio and usually attributed to Giotto, was actually begun twenty years after Giotto's death. A mid-15th century pen-and-ink drawing of this so-called Giotto's façade is visible in the Codex Rustici, and in the drawing of Bernardino Poccetti in 1587, both on display in the Museum of the Opera del Duomo. This façade was the collective work of several artists, among them Andrea Orcagna and Taddeo Gaddi. This original façade was only completed in its lower portion and then left unfinished. It was dismantled in 1587-1588 by the Medici court architect Bernardo Buontalenti, ordered by Grand Duke Francesco I de' Medici, as it appeared totally outmoded in Renaissance times. The competition for a new façade turned into a huge corruption scandal. The wooden model for the façade of Buontalenti is on display in the Museum Opera del Duomo. A few new designs had been proposed in later years but the models (of Giovanni Antonio Dosio, Giovanni de' Medici with Alessandro Pieroni and Giambologna) were not accepted. The façade was then left bare until the 19th century.

In 1864, a competition was held to design a new façade and was won by Emilio De Fabris (1808–1883) in 1871. Work began in 1876 and completed in 1887. This neo-gothic façade in white, green and red marble forms a harmonious entity with the cathedral, Giotto's bell tower and the Baptistery, but some think it is excessively decorated.
The whole façade is dedicated to the Mother of Christ. 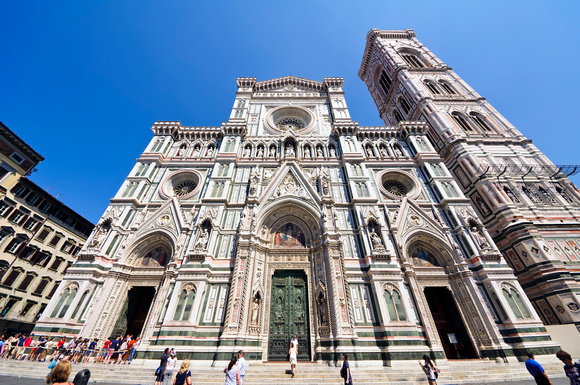