Hiroshima Peace Memorial, commonly called the Atomic Bomb Dome or Genbaku Dōmu in Hiroshima, Japan, is part of the Hiroshima Peace Memorial Park and was designated a UNESCO World Heritage Site in 1996. The ruin serves as a memorial to the people who were killed in the atomic bombing of Hiroshima on 6 August 1945. Over 70,000 people were killed instantly, and another 70,000 suffered fatal injuries from the radiation.

At 8:15 a.m. on 6 August 1945, Little Boy — the first atomic bomb to be used in war — was dropped by the United States Army Air Forces from the Enola Gay, a B-29 bomber. The force of the atomic bomb effectively obliterated the city of Hiroshima, Japan. The bomb exploded directly over the Shima Hospital, which was very near to the Genbaku Dome. Because the atomic bomb exploded almost directly overhead, the building was able to retain its shape. The building's vertical columns were able to resist the nearly vertical downward force of the blast, and parts of the concrete and brick outer walls remained intact. The center of the blast was displaced 150 m (490 ft) horizontally and 600 m (2,000 ft) vertically from the Dome, having slightly missed the original target, the distinctive "T"-shaped Aioi Bridge. The Dome was 160 meters from the hypocenter of the atomic blast. Everyone inside the building was killed instantly.

Weathering and deterioration of the Genbaku Dome continued in the post-war period. The Hiroshima City Council declared in 1966 that it intended to indefinitely preserve the structure, now termed "Genbaku Dome". The Genbaku Dome stands almost exactly as it did after the bombing on 6 August 1945. Changes to the ruins, meant to ensure the stability of the structure, have been minimal. 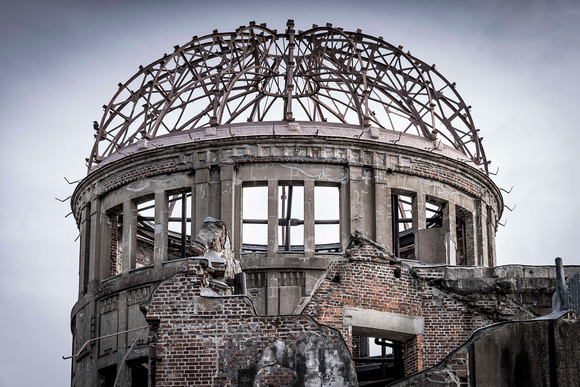