The Arch of Hadrian in Jerash

Jerash is the site of the ruins of the Greco-Roman city of Gerasa, also referred to as Antioch on the Golden River. The Arch of Hadrian in Jerash is an 11-metre high triple-arched gateway erected to honor the visit of Roman Emperor Hadrian to the city (then called Gerasa) in the winter of 129–130. The Arch originally stood to almost 22 m and probably had wooden doors. The arch features some unconventional, possibly Nabataean, architectural features, such as acanthus bases. The columns are decorated with capitals at the bottom rather than the top. The monument served both as a commemorative arch and as an approach to Gerasa. The Arch's relative remoteness from the city walls points to a plan for southward expansion of Gerasa during its heyday. The expansion, however, has not been implemented. 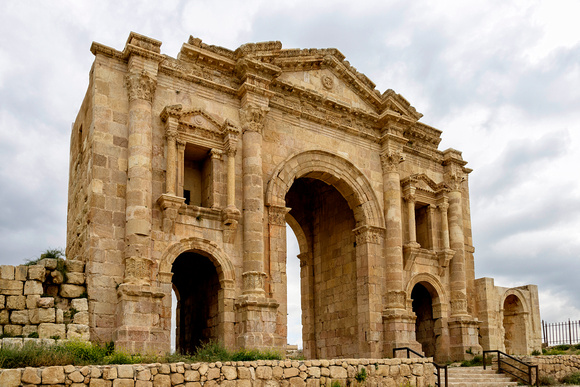