Bedouin on dromedary camel in Lawrence of Arabia valley

The Bedouin are an Arab seminomadic group, descended from nomads who have historically inhabited the Arabian and Syrian Deserts. Their name means "desert dwellers" in Arabic. Their territory stretches from the vast deserts of North Africa to the rocky sands of the Middle East. They are traditionally divided into tribes, or clans (known in Arabic as ʿashāʾir) and share a common culture of herding camels and goats.

While many Bedouins have abandoned their nomadic and tribal traditions for modern urban lifestyle, they retain traditional Bedouin culture with concepts of belonging to ʿašāʾir, traditional music, poetry, dances (like Saas), and many other cultural practices. 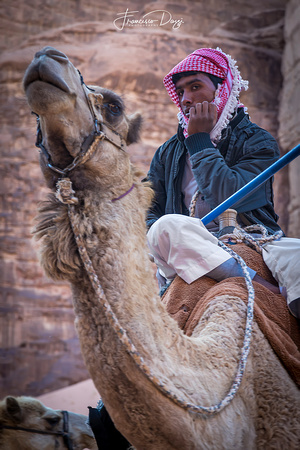