Elephants are large mammals of the family Elephantidae and the order Proboscidea. Two species are traditionally recognised, the African elephant (Loxodonta africana) and the Asian elephant (Elephas maximus).

Male African elephants are the largest extant terrestrial animals and can reach a height of 4 m (13 ft) and weigh 7,000 kg (15,000 lb). All elephants have several distinctive features the most notable of which is a long trunk or proboscis, used for many purposes, particularly breathing, lifting water and grasping objects. Their incisors grow into tusks, which can serve as weapons and as tools for moving objects and digging. Elephants' large ear flaps help to control their body temperature. Their pillar-like legs can carry their great weight. African elephants have larger ears and concave backs while Asian elephants have smaller ears and convex or level backs.

Elephants are herbivorous and can be found in different habitats including savannahs, forests, deserts and marshes. They prefer to stay near water. 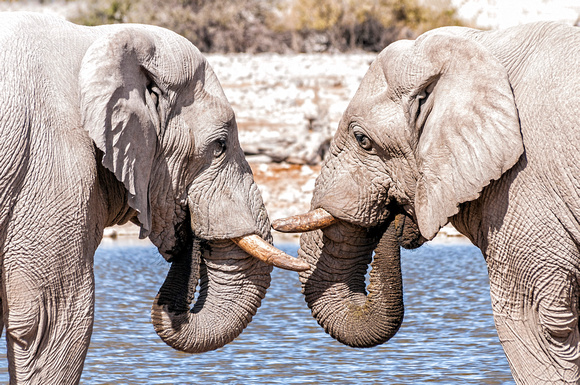