The Louvre Pyramid is a large glass and metal pyramid, surrounded by three smaller ones, in the courtyard of the Louvre Museum (Musée du Louvre) in Paris, France. The large pyramid serves as the main entrance to the museum. Completed in 1989, it has become a landmark for the city of Paris.

Commissioned by then French president François Mitterrand in 1984, it was designed by the architect I. M. Pei, who is responsible for the design of the Miho Museum in Japan among others. The structure, which was constructed entirely with glass segments, reaches a height of 20.6 meters (about 70 feet); its square base has sides of 35 meters (115 ft). It consists of 603 rhombus-shaped and 70 triangular glass segments.

The pyramid and the underground lobby underneath it were created because of a series of problems with the Louvre's original main entrance, which could no longer handle an enormous number of visitors on an everyday basis. Visitors entering through the pyramid descend into the spacious lobby then re-ascend into the main Louvre buildings. 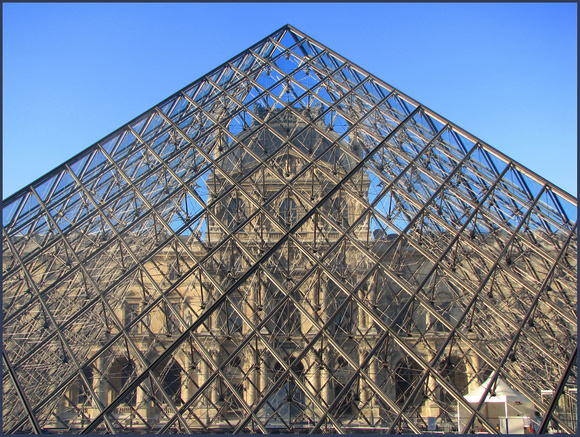