The Louvre Museum (French: Musée du Louvre), located in Paris, France, is the world's most visited art museum, a historic monument, and a national museum of France. It is a central landmark in Paris, and is located on the Right Bank of the Seine in the neighbourhood of the 1st arrondissement. The collection has roughly 35,000 pieces on display, which are exhibited over 60,000 square metres (650,000 sq ft).

The museum is housed in the Louvre Palace (Palais du Louvre), which was built on land formerly occupied by a fortress constructed in 1190 under Philip II. Building of the Palace seen today began in 1546 under Francis I. The king employed architect Pierre Lescot and sculptor Jean Goujon, who renovated the site in French Renaissance style. Construction was continued by the sovereigns who followed him. The 460-metre (1,509 ft) Grande Galerie, used today to display paintings, was begun by Henry IV in 1594. The structure was again increased in size under the Bourbon dynasty, when architects Le Vau and Lemercier completed the Cour Carrée. The Grand Louvre Project added the Pyramid and La Pyramide Inversée, finished in 1989 and 1993 respectively.

The museum officially opened to the public on 10 August 1793, one year after the fall of Louis XVI in the French Revolution. 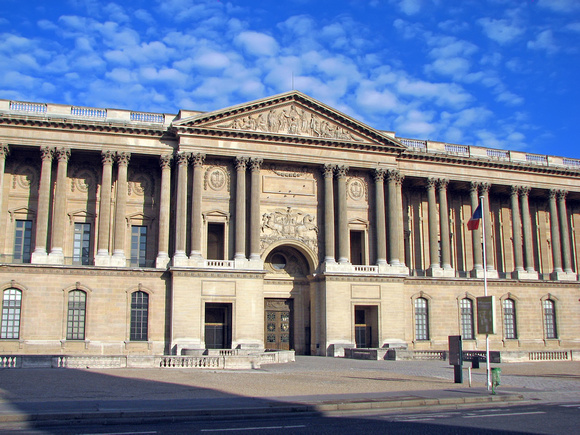