The Arc de Triomphe du Carrousel is a triumphal arch in Paris, France. It is located on the Place du Carrousel, just to the west of the Louvre.
Designed by Charles Percier and Pierre Léonard Fontatine, the arch was made between 1806-1808 by the Emperor Napoleon I on the model of the Arch of Septimius Severus in Rome. It was commissioned to commemorate France's military victories in 1805. It was originally surmounted by the famous horses of Saint Mark's Cathedral in Venice, captured by Napoleon, but these were returned to Venice in 1815. They were replaced by a quadriga sculpted by Baron François Joseph Bosio, depicting Peace riding in a triumphal chariot led by gilded Victories on both sides. The composition commemorates the Restoration of the Bourbons following Napoleon's downfall. 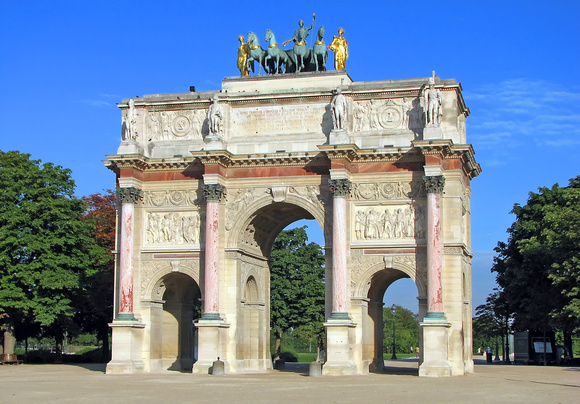