Café Procope, in rue de l'Ancienne Comédie, 6th arrondissement, is the oldest restaurant of Paris. It was opened in 1686 by the Sicilian Francesco Procopio dei Coltelli, with a slyly subversive name adopted from the historian Procopius, whose Secret History, the Anekdota, long known of, had been discovered in the Vatican Library and published for the first time ever in 1623: it told the scandals of Emperor Justinian, his ex-dancer Empress, and his court.

During the Revolution the Phrygian cap, soon to be the symbol of Liberty, was first displayed at the Procope; the Cordeliers, Robespierre, Danton and Marat all used the cafe as a meeting place. After the Restoration, another famous customer was Alexander von Humboldt, who lunched here during the 1820s every day from 11am to noon. The Procope retained its literary cachet: Alfred de Musset, George Sand, Gustave Planche, the philosopher Pierre Leroux, M. Coquille, editor of Le Monde, Anatole France were all regulars. Under the Second Empire, August Jean-Marie Vermorel of Le Reforme or Léon Gambetta would expound their plans for social reform. In 1874, however, Café Procope closed its doors, seemingly forever. Its impending disappearance occasioned a historical note in Notes and Queries 16 August 1890, but it soon reopened, now as something of a historical landmark, as Les Deux Magots would become. It was refurbished in 1989 in eighteenth-century style. 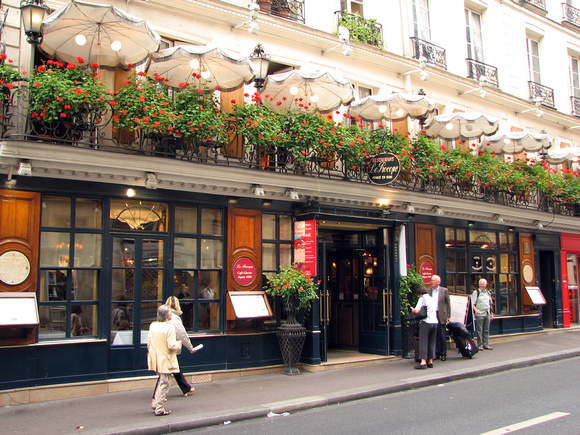