It was originally called "Cabaret des Assassins". Tradition relates that the cabaret received this name because a band of assassins broke in and killed the owner's son. The cabaret was more than twenty years old when, in 1875, the artist Andre Gill painted the sign that was to suggest its permanent name. It was a picture of a rabbit jumping out of a saucepan, and residents began calling their neighborhood night-club "Le Lapin à Gill", meaning "Gill's rabbit".

Over time the name evolved into "Cabaret Au Lapin Agile", or, the Nimble Rabbit Cabaret. At the turn of the twentieth century, the Lapin Agile was a favorite spot for struggling artists and writers, including Picasso, Modigliani, Apollinaire, and Utrillo.
Au Lapin Agile, ca 1880-90

The Lapin Agile is located in the center of the Montmartre district in the 18th arrondissement of Paris, behind and slightly northwest of Sacre Coeur Basilica.
© 2007 Francesco Dazzi - All Rights Reserved 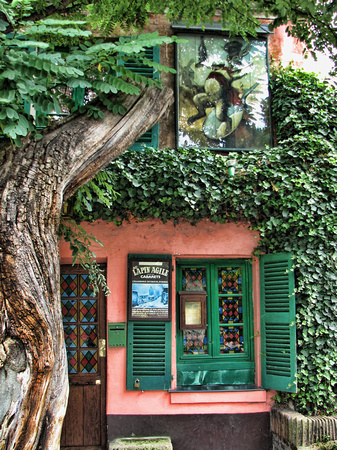