The Balmoral is a luxury five-star property and landmark in Edinburgh, Scotland. It is located in the heart of the city at the east end of Princes Street, the main shopping street beneath the Edinburgh Castle rock, and the southern edge of the New Town. Resulting from a competition in 1895,[1] the hotel originally opened on 15 October 1902. It was designed by architect William Hamilton Beattie and for most of the twentieth century was known as the North British Station Hotel or simply the N.B., a traditional railway hotel built for the North British Railway Company adjacent to their Waverley Station.

The building’s architecture is Victorian, influenced by the traditional Scottish baronial style. It was stripped of most of its ornamental stone balconies in its refurbishment, and while remaining ornate, is visibly "scarred". Since 1902, the hotel's clock has been set three minutes fast to ensure that the people of Edinburgh wouldn't miss their trains. This is still the case today. The only day that the clock runs on time is on 31 December (Hogmanay) for the city’s New Year celebrations. The clock tower, at 190 feet (58 m) high, forms a prominent landmark in Edinburgh's city centre. 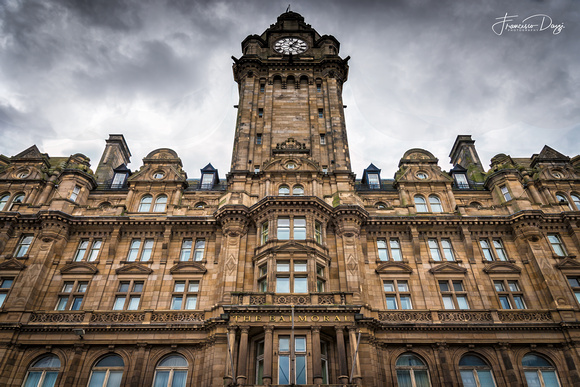