The north gopuram of the Meenakshi temple

Meenakshi Temple, also referred to as Meenakshi Amman or Meenakshi-Sundareshwara Temple, is a historic Hindu temple located on the southern bank of the Vaigai River in the temple city of Madurai, Tamil Nadu, India. It is dedicated to Meenakshi, a form of Parvati, and her consort, Sundareshwar, a form of Shiva. The temple is at the center of the ancient temple city of Madurai mentioned in the Tamil Sangam literature, with the goddess temple mentioned in 6th century CE texts. The temple is a major pilgrimage destination within the Shaivism tradition, dedicated to Meenakshi Devi and Shiva. However, the temple includes Vishnu in many narratives, sculptures and rituals as he is considered to be Meenakshi's brother.

The complex houses 14 gopurams (gateway towers), ranging from 45â€“50m in height. A Gopuram or gopura is a monumental entrance tower, usually ornate, at the entrance of a Hindu temple, in the Dravidian architecture of the Tamil Nadu, Andhra Pradesh, Kerala, Karnataka, and Telangana states of Southern India.

A gopuram is usually a tapering oblong in form with ground-level wooden doors, often richly decorated, providing access. Above is the tapering or "battered" gopuram, divided into many storeys which diminish in size as the gopuram tower narrows. Usually the tower is topped with a barrel vaulted roof with a finial. Gopurams are exquisitely decorated with sculpture and carvings and painted with a variety of themes derived from the Hindu mythology, particularly those associated with the presiding deity of the temple where the gopuram is located. 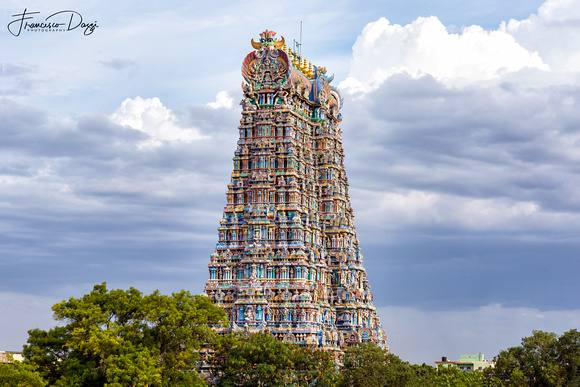