Couple praying in front of Nandi in Madurai

Nandi is the gate-guardian deity of Kailasa, the abode of Lord Shiva. He is usually depicted as a bull, which also serves as the mount to Shiva. According to Saivite siddhantic tradition, he is considered as the chief guru of eight disciples of Nandinatha Sampradaya, namely, Sanaka, Sanatana, Sanandana, Sanatkumara, Tirumular, Vyagrapada, Patanjali, and Sivayoga Muni, who were sent in eight different directions, to spread the wisdom of Shaivism. 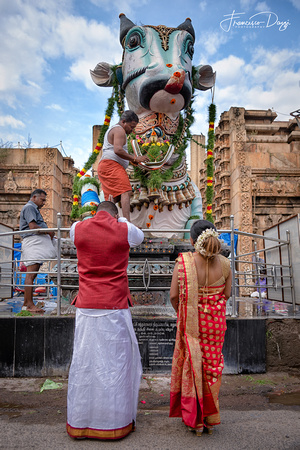