The Rajiv Gandhi Memorial is a memorial to Indian prime minister Rajiv Gandhi at the site where he was assassinated at Sriperumbudur, Chennai, Tamil Nadu India.

Designed by K T Ravindran, it was built by the Central Public Works Department and was opened up in 2003 by Gandhi's widow Sonia Gandhi and former President of India APJ Abdul Kalam.

Rajiv Gandhi (20 August 1944 – 21 May 1991) was an Indian politician who served as the 6th Prime Minister of India from 1984 to 1989. He took office after the 1984 assassination of his mother, Prime Minister Indira Gandhi, to become the youngest Indian Prime Minister at the age of 40.

The assassination of Rajiv Gandhi, former Prime Minister of India, occurred as a result of a suicide bombing in Sriperumbudur, Chennai, in Tamil Nadu, India on 21 May 1991. At least 14 others were also killed. It was carried out by Thenmozhi Rajaratnam, also known as Dhanu, member of the Liberation Tigers of Tamil Eelam (LTTE), a militant organization from Sri Lanka; at the time India had just ended its involvement, through the Indian Peace Keeping Force, in the Sri Lankan Civil War. 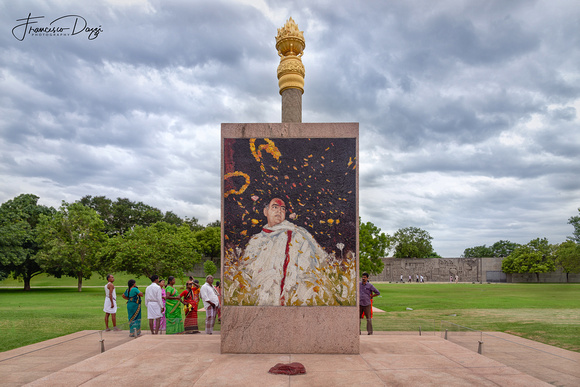